Sunrise on the Farmbelt
The long weekend at the beginning of August was promising to be much cooler than the recent temperatures - and also pretty wet. So, knowing that Friday was looking to be the best day, I planned to head out in the morning before work to catch the sun as it rose over farm fields on County Road 2, near the cottage.
Before leaving the resort, I naturally stopped at the lake. The sun was already above the horizon and that strong warm light was a great contrast against the blue of the water. 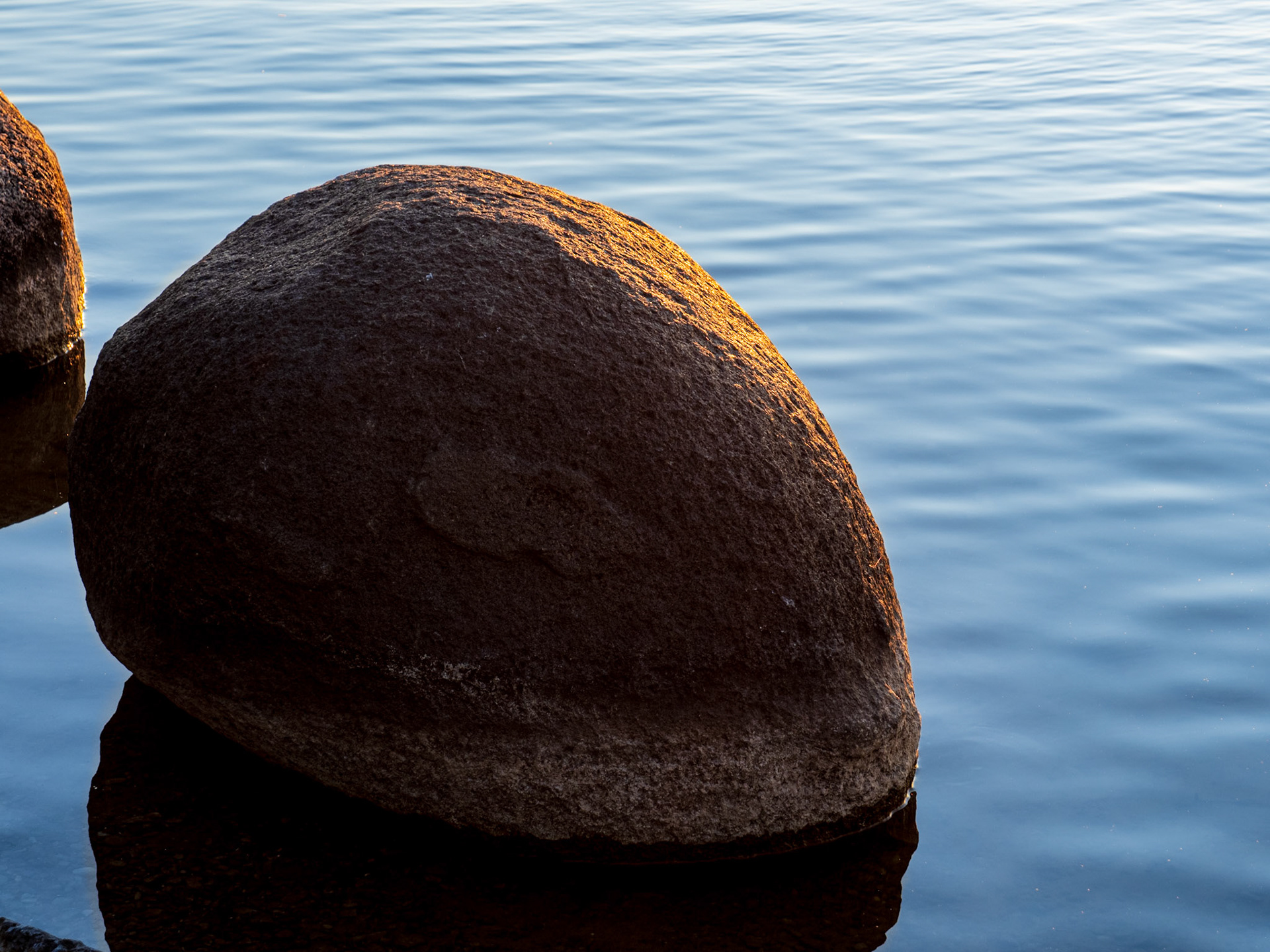 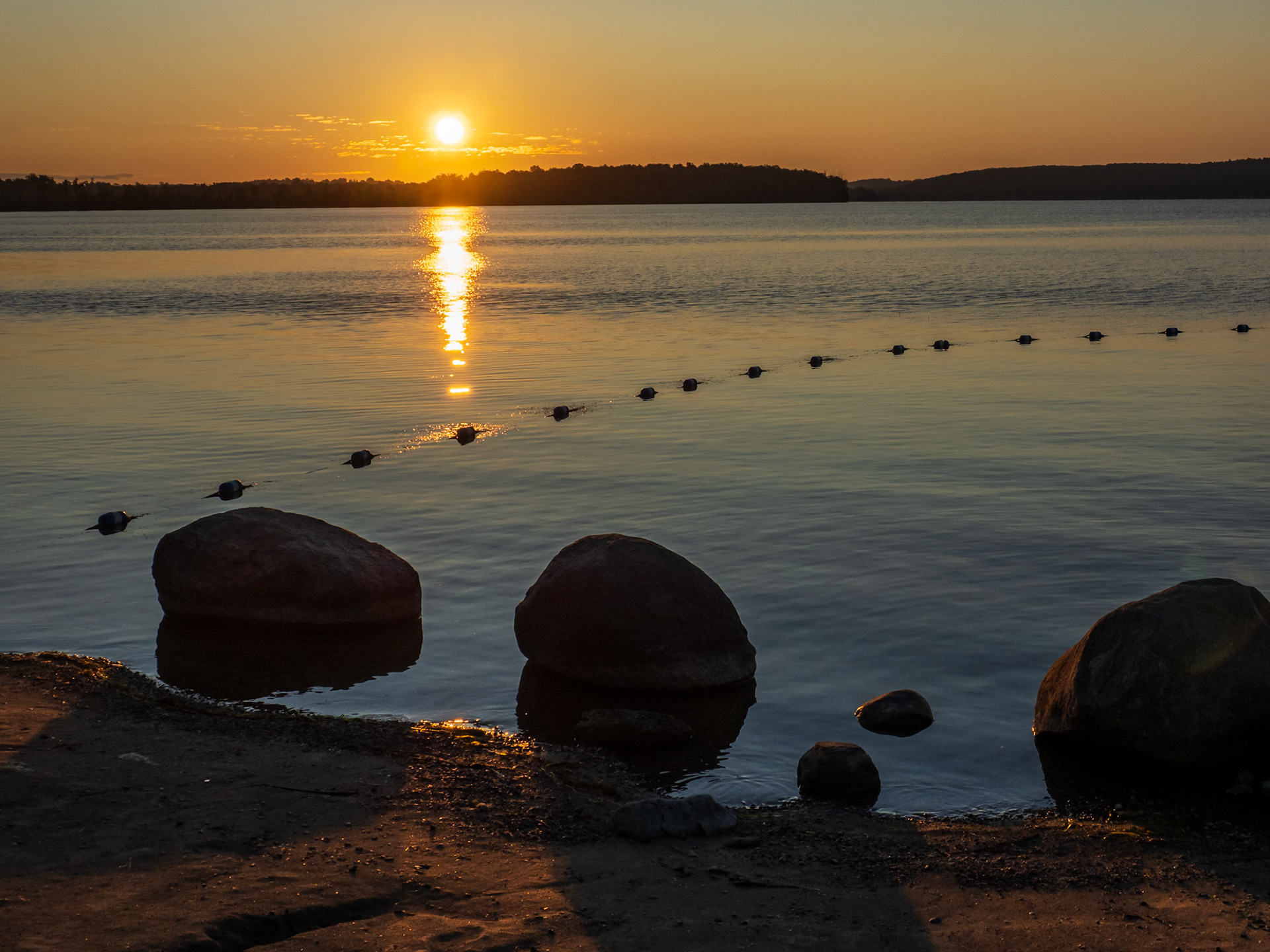 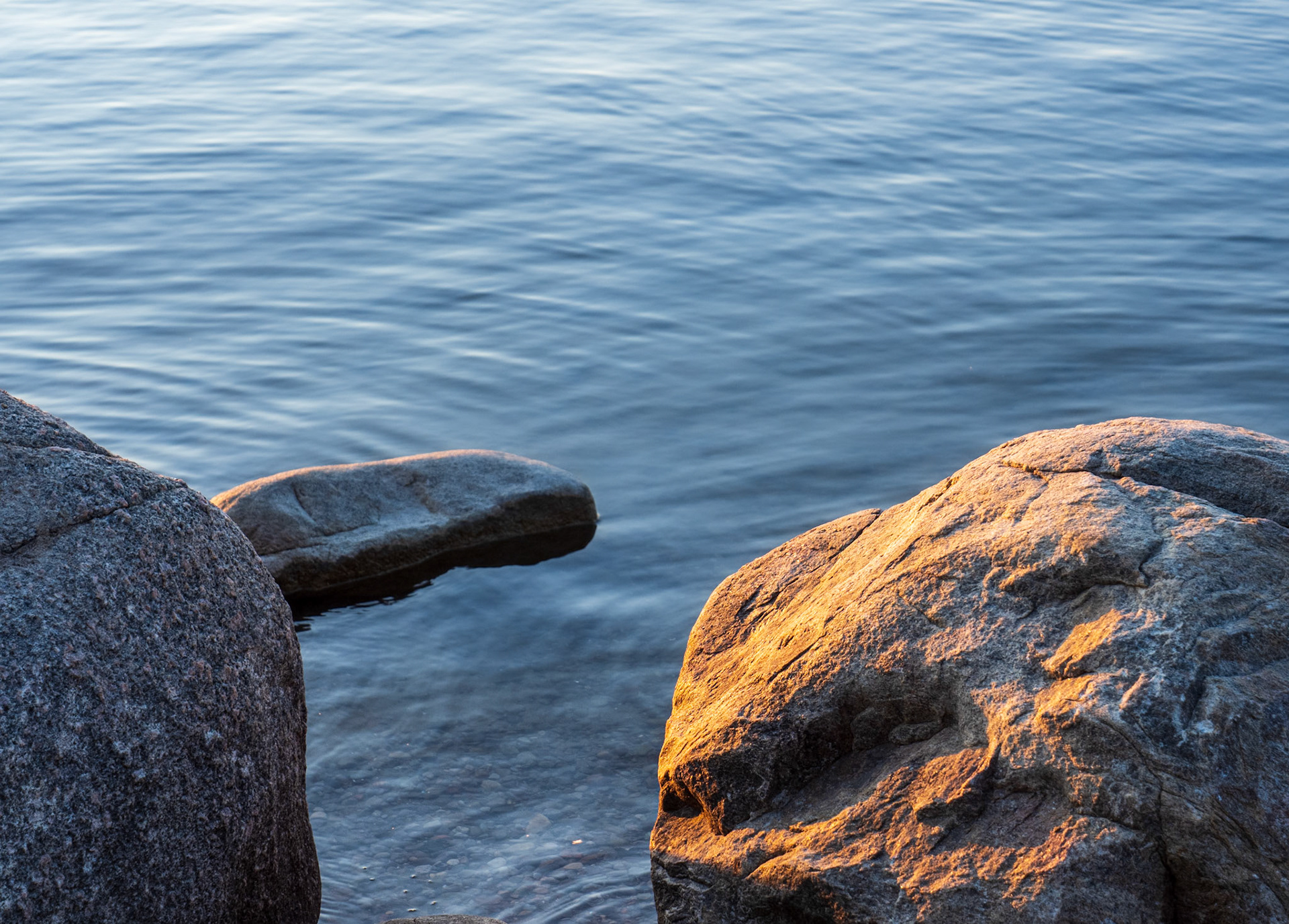 Can you ear what I ear?​​​​​​​
My original goal for the morning photo shoot was to capture an abandoned tractor and a specific hayfield (results below), but the views of the cornfields as I left Keene forced me to pull over first. There’s something mesmerizing about those unnaturally uniform rows of corn, especially when you get viewing angles where the rows are apparent. As well as being a practical, age-old farming technique, the lines, patterns and shapes created by structured planting are dynamic and visually powerful. The rows of corn accentuate the shape of the terrain they grow upon. 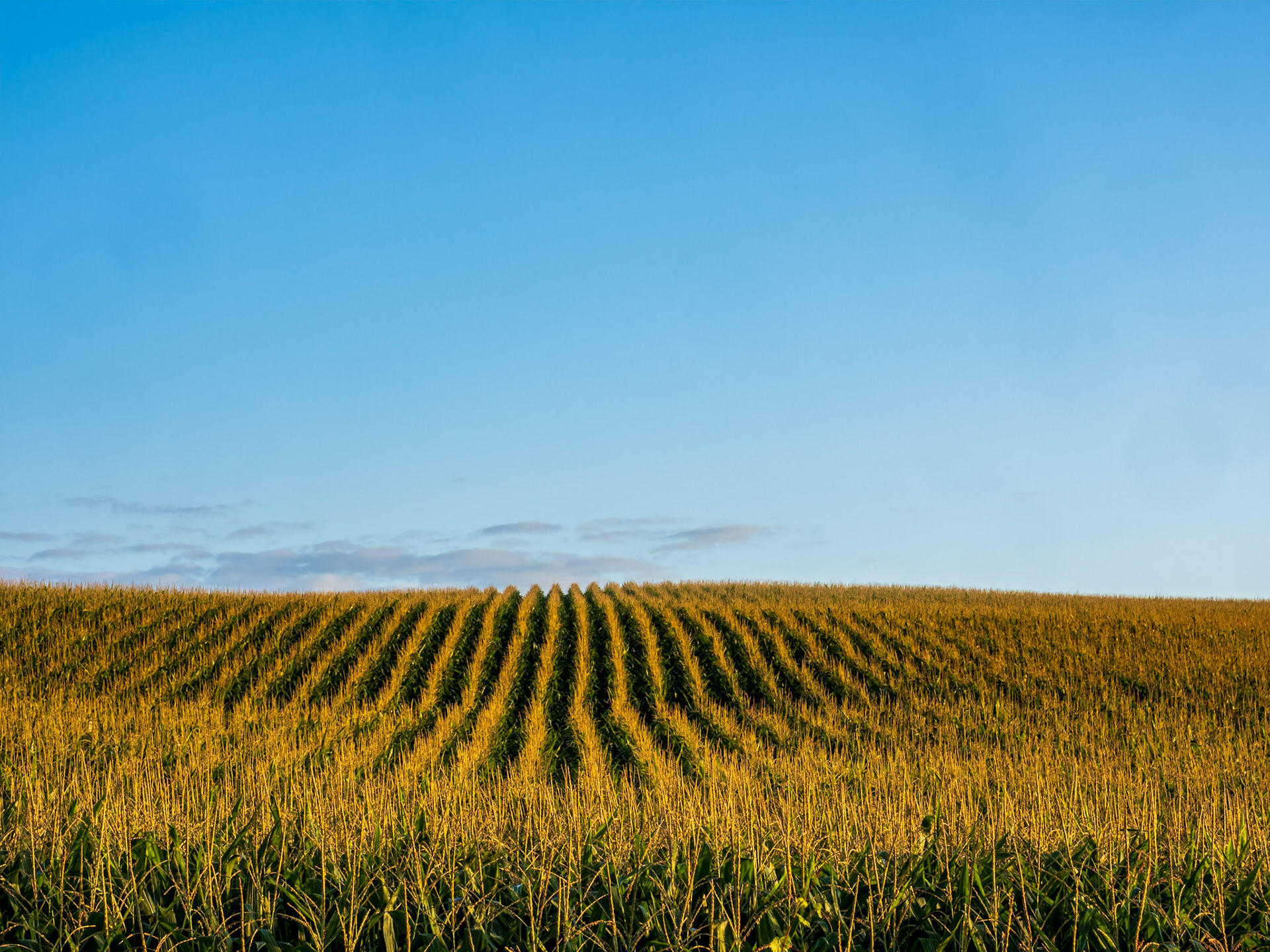 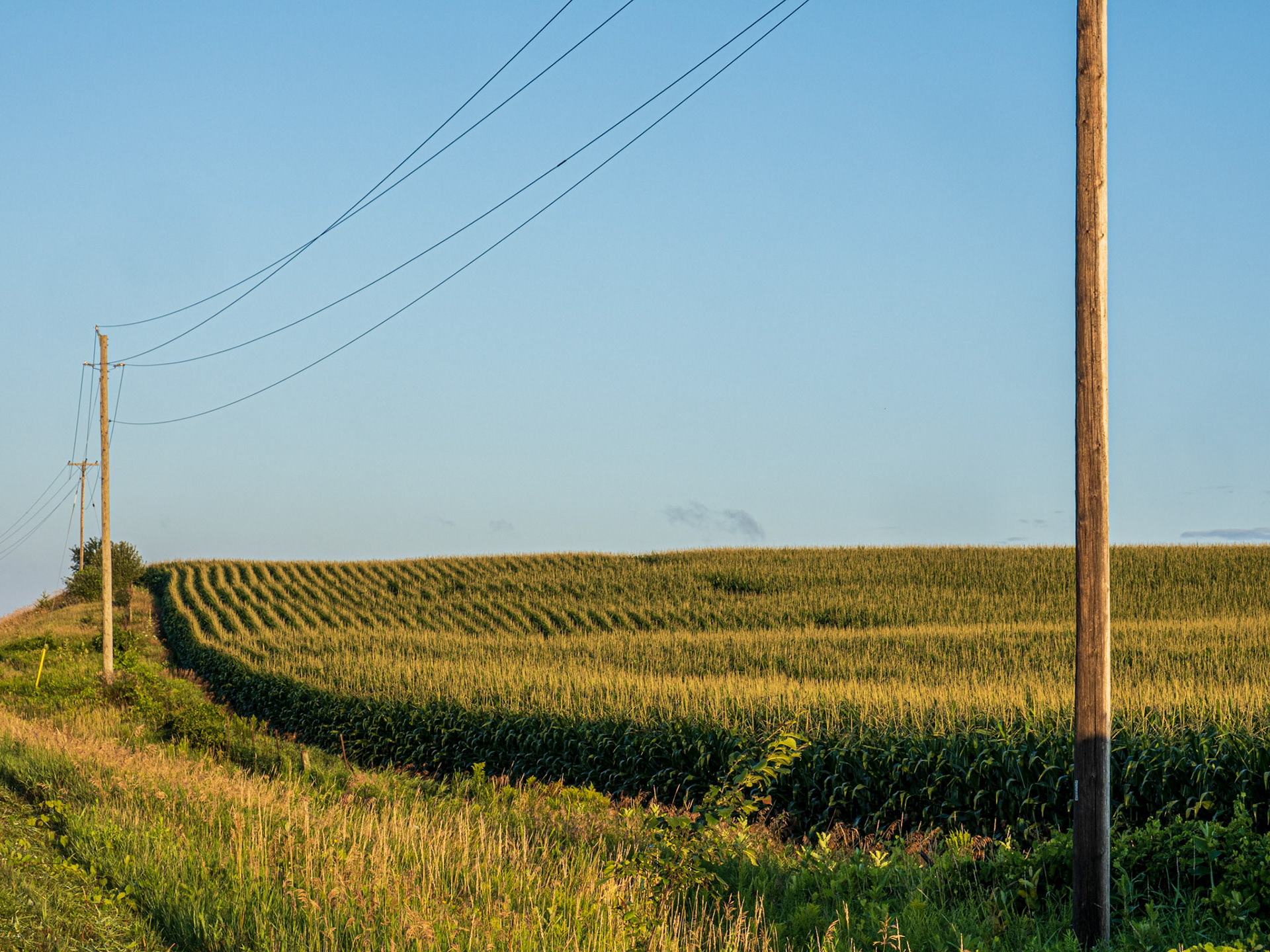 I love the texture and the stacking of organic and inorganic patterns in the image below, on the right. The cornfield appears almost impenetrable. 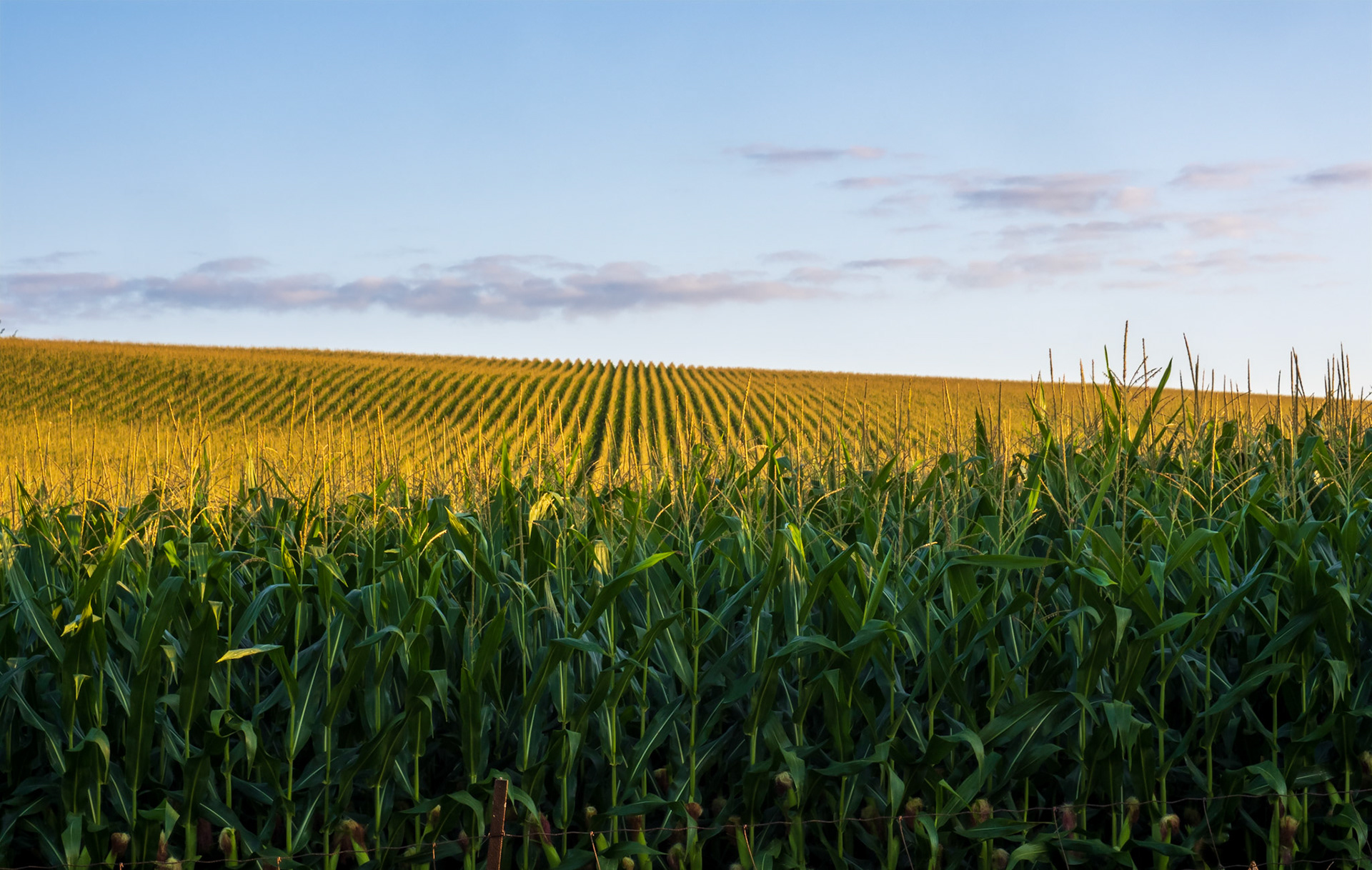 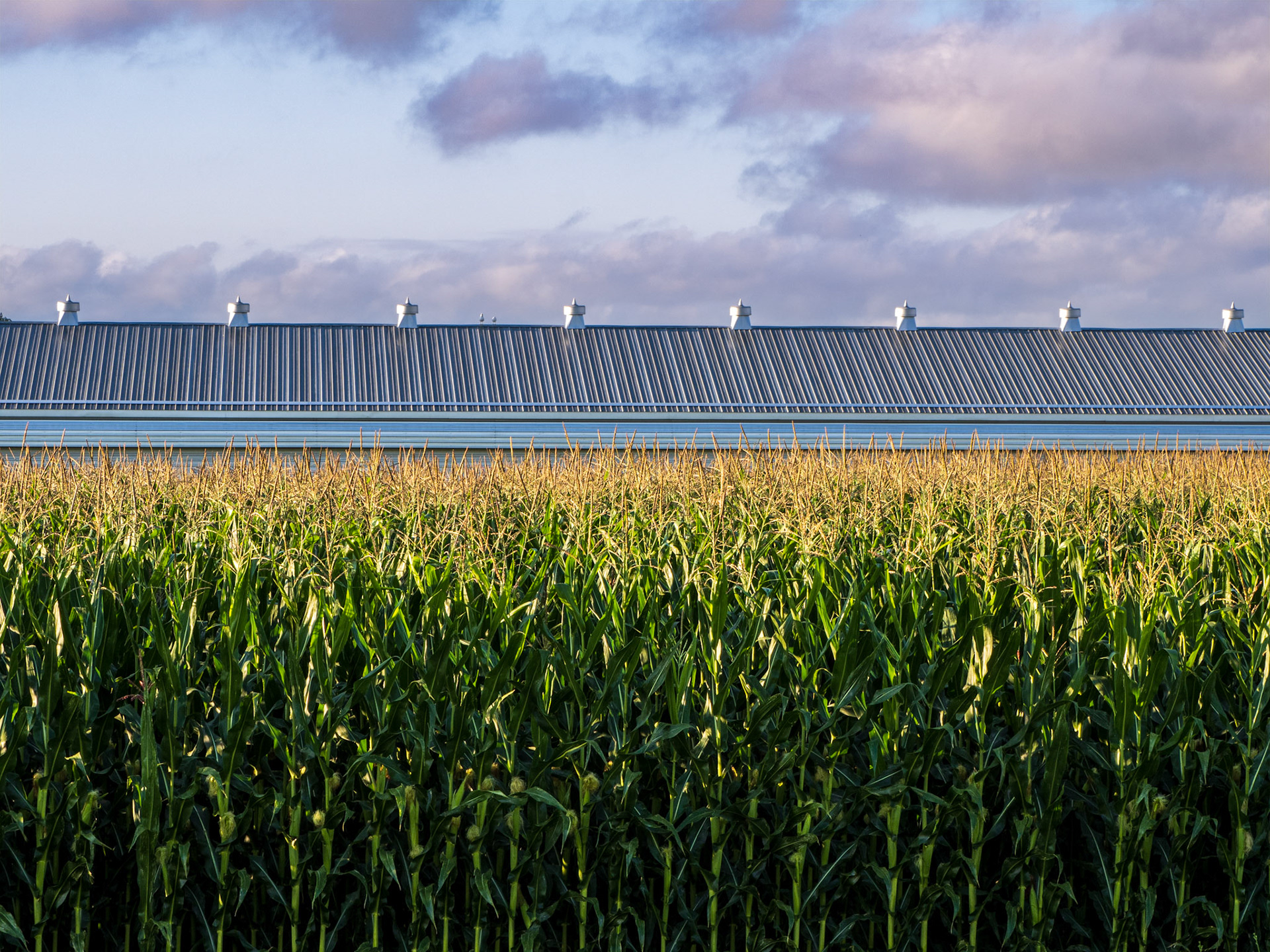 Tech note: It was early(ish) morning when these images were captured and there was a fair amount of contrast thanks to the side lighting. This not only added visual impact but enhanced the texture in the scenes. That said, I worked with local adjustments while processing the images in Lightroom to bring out more detail and colour in the morning sky. A touch of Clarity, Dehaze and a reduction in highlights often did the trick. Where clouds were predominant, I took some artistic license with color balance, often warming them up and adding a small amount of magenta for a bit more drama.
Unlike some photographers, I really enjoy the processing side of photography - especially now that it’s digital. It is really the other half of the photographic equation. You can learn more about my thoughts on image processing here: What is a Photograph?
Hay, hay, hay...
I had spent quite a while photographing this hayfield, lens nearly pointed towards the rising sun. I came away with some solid compositions, including this one, which I processed in more of a vintage theme, rather than my normal saturated landscape look. While I don’t process this way often, I do like the end result. 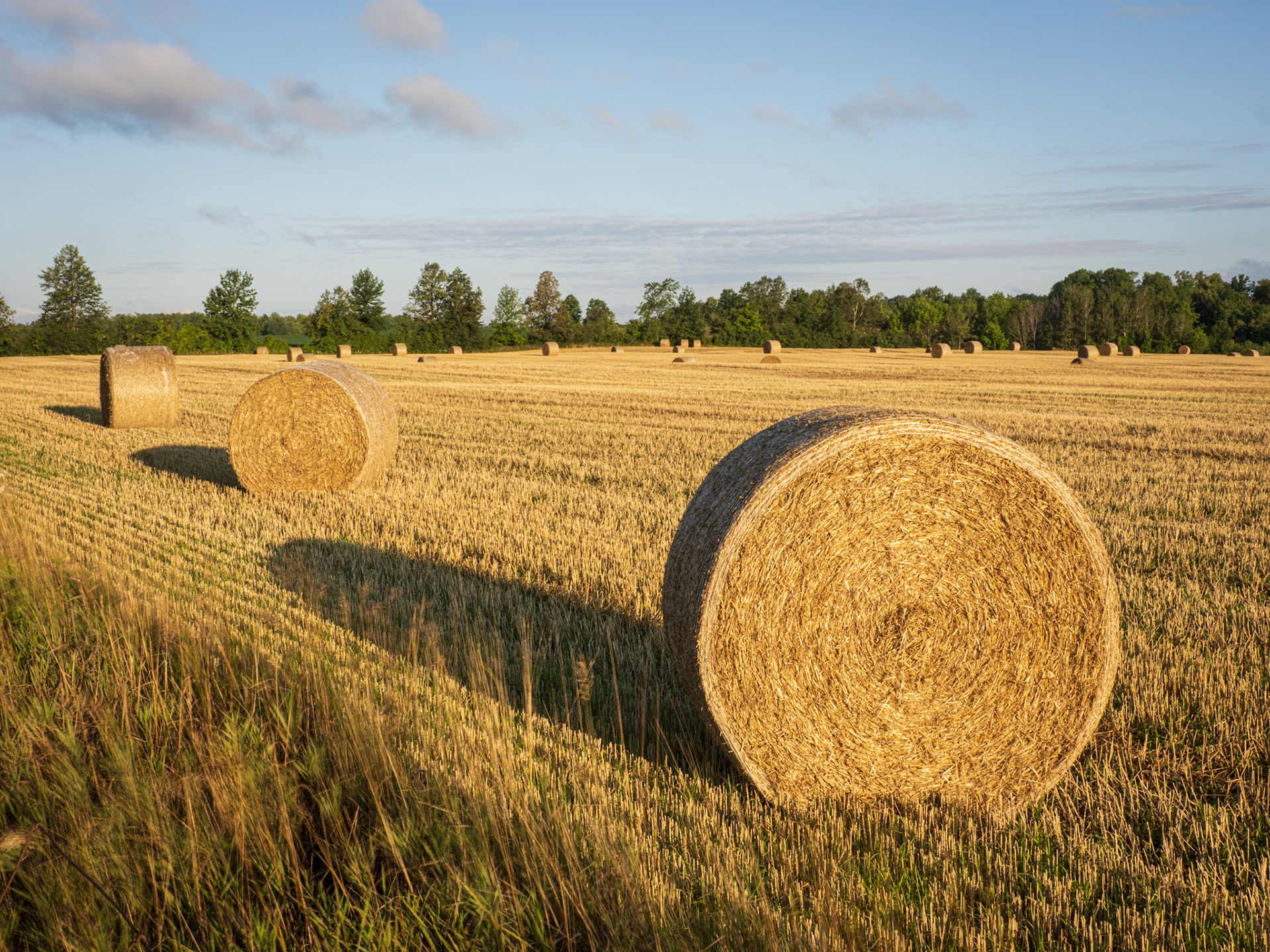 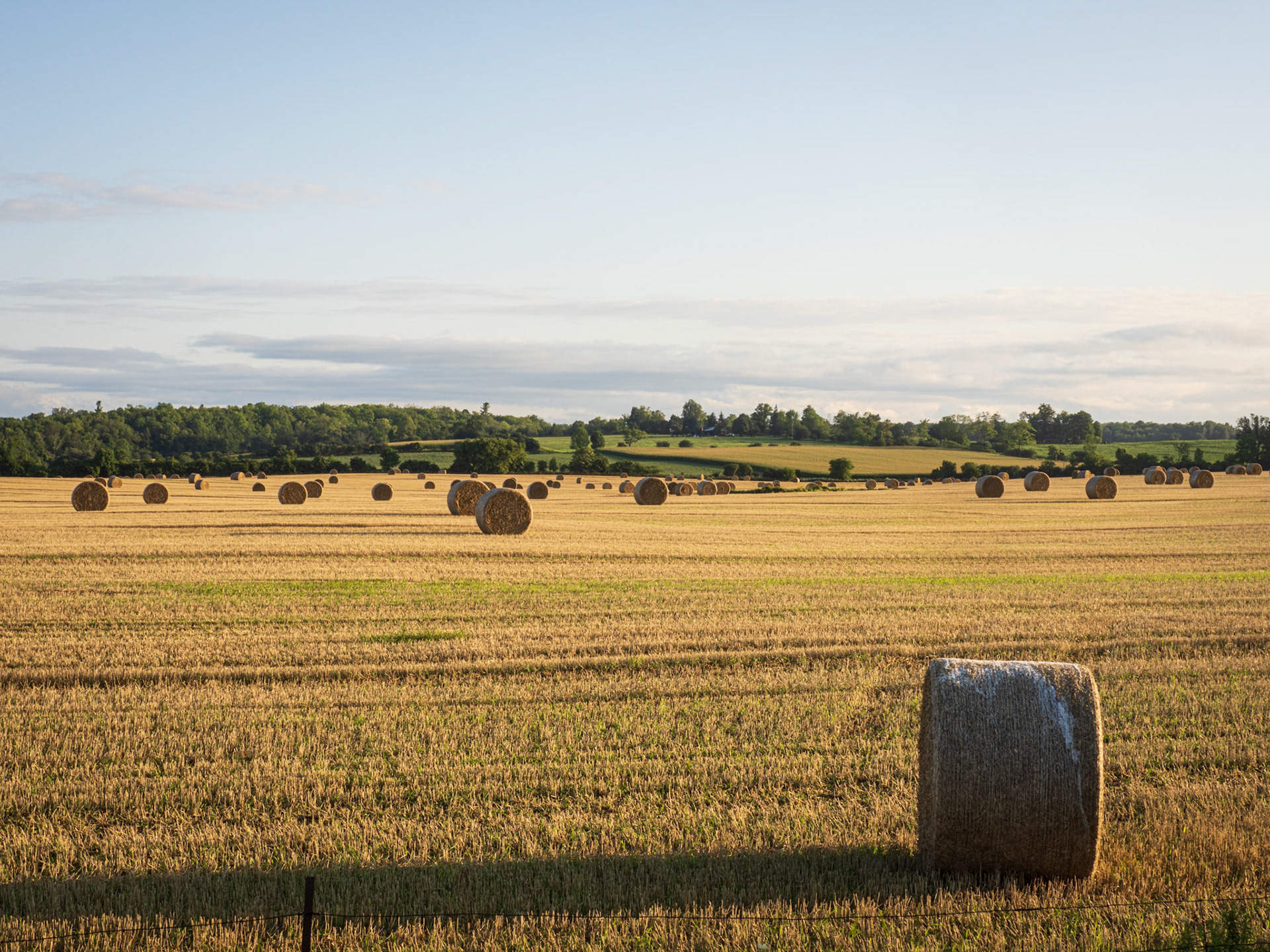 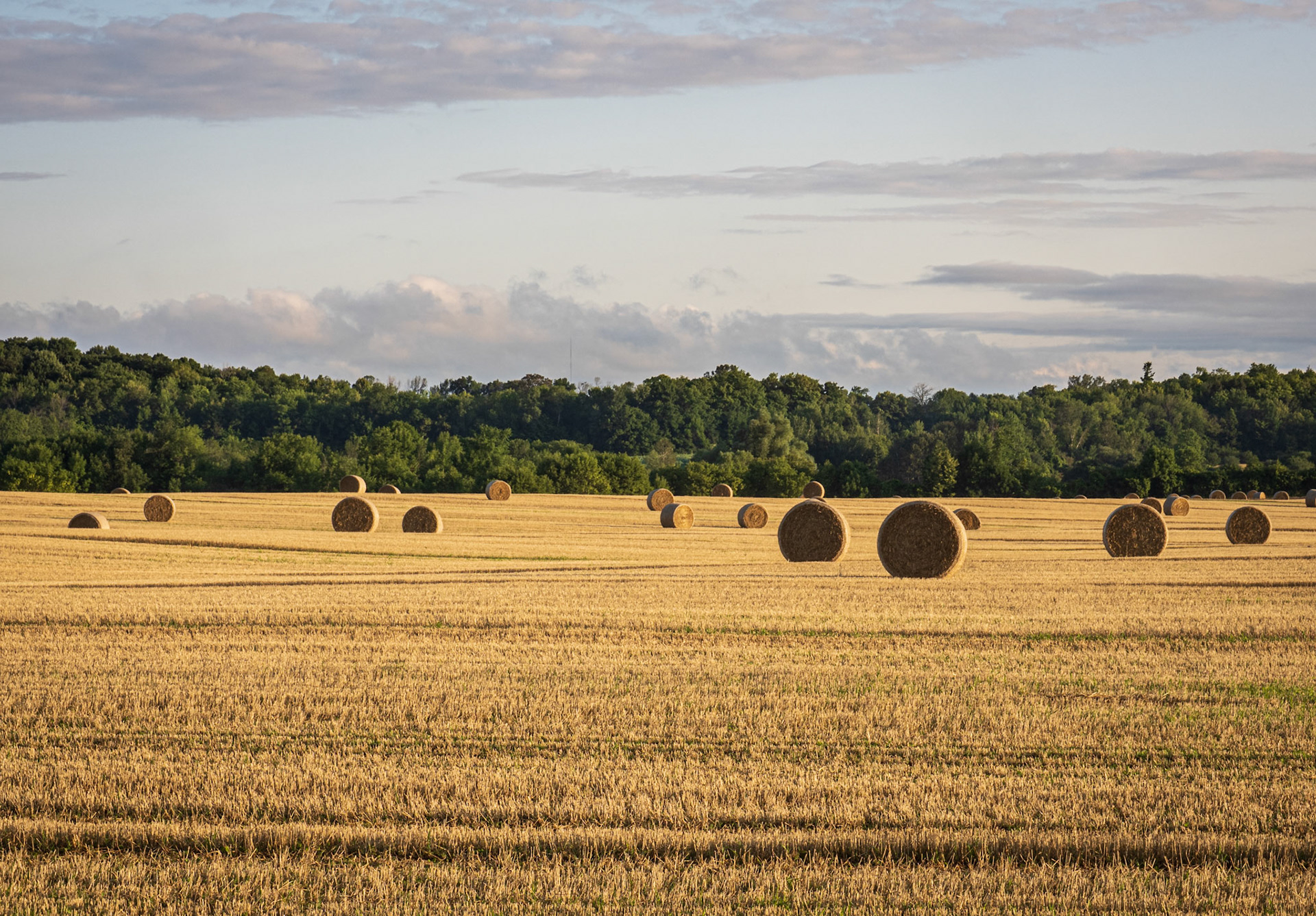 I knew there was an open gate a little further down the road - I had spotted it the day before on the drive in - and that gate stuck in my mind as another visual opportunity.  As I turned away from the field to head down the road to the gate, the sky opposite to the sunrise just jumped out at me. More clouds were forming and they were strongly illuminated. I spent the next several minutes composing a variety of images with the gate playing major and minor roles.

I processed 3 images of the field and gate and frankly struggled with which one to share on Instagram. I finally chose the image below, primarily because of the leading lines of the gate. Even though the gate on the right stops the eye at first, I think the strong diagonal of the gate moves the viewer deeper into the field. I believe the other two have merit as well, so I am happy I can share the trio here in this project. 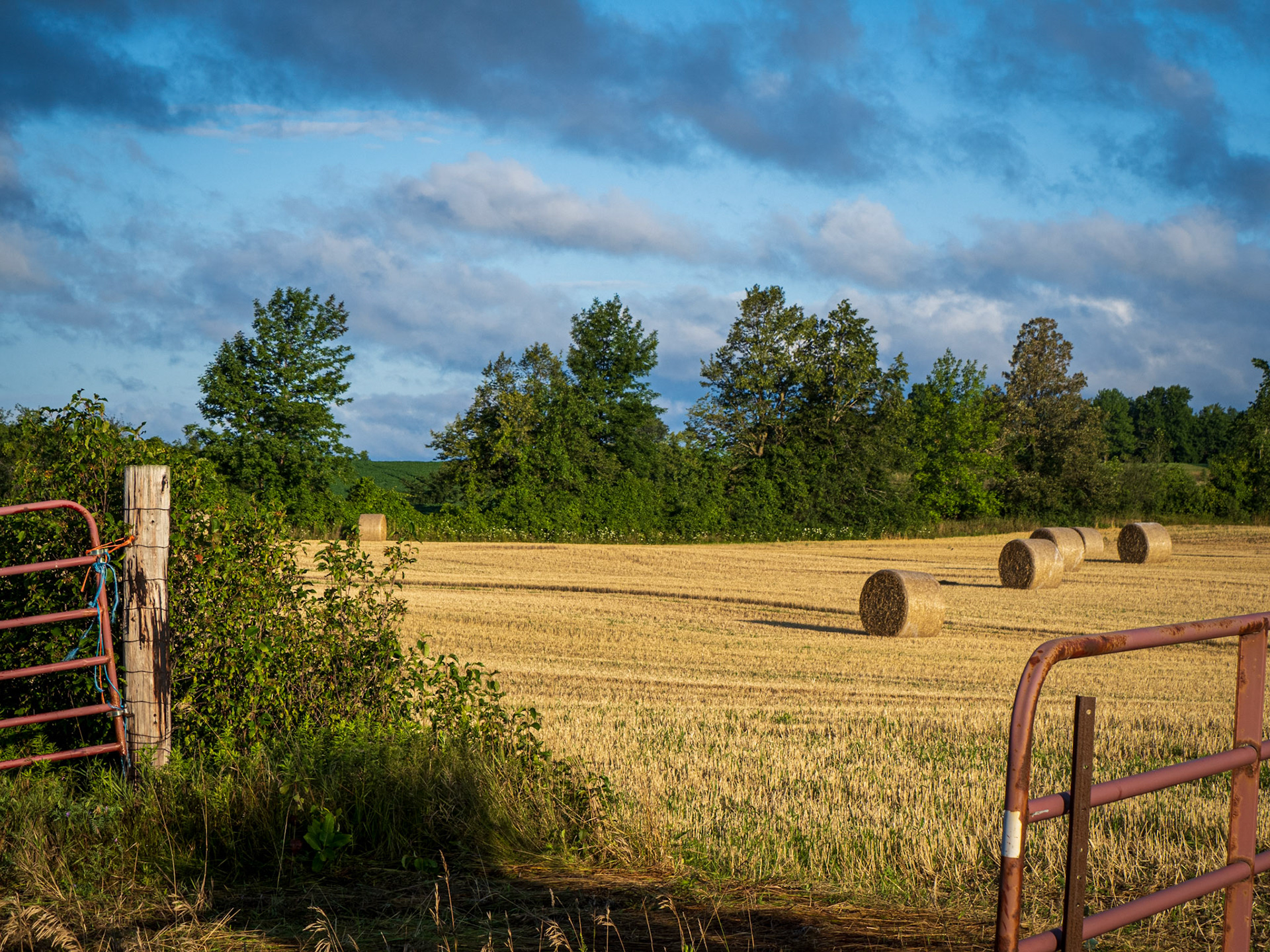 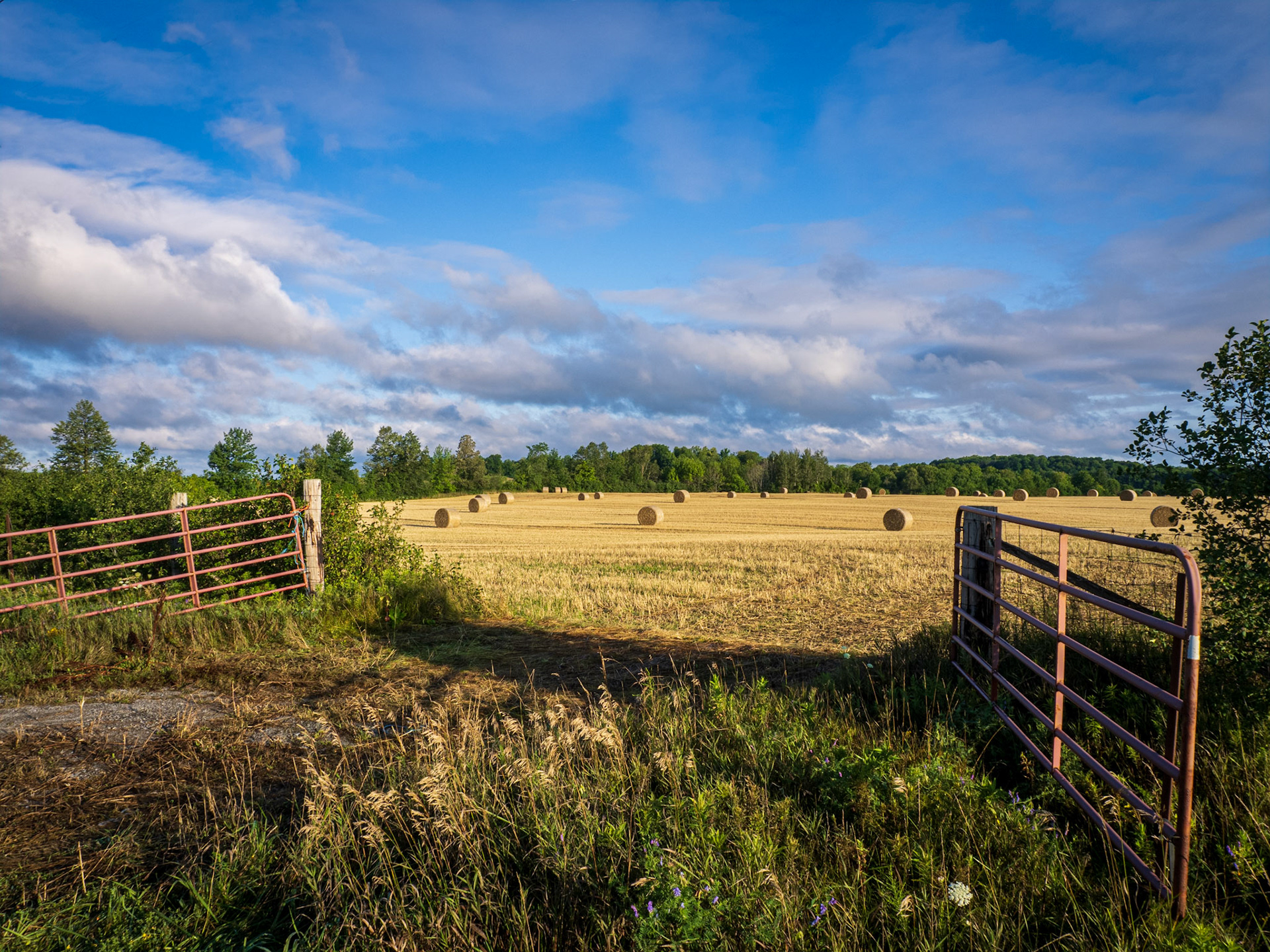 Out to Pasture
I’ve driven past this old tractor on County Road 2 countless times on my way to the #fortressofmoderatesolitude. I always tell myself that I’m going to make a photograph of it, but I need the right light.
Well, on this sunrise photo shoot of hay and corn fields, I made sure to go as far west as the tractor. It was mostly backlit, but the sun was high enough that the sky provided a decent ambient fill light. I love the shadows created by the back lighting, but as the sun went behind some clouds I was able to get a less contrasty close up of the tractor. Scenes like this remind me that even though I’m in “cottage country,” the rural roots of this region are solidly agricultural.

I took some artistic license, toning down the overly saturated caution sign hanging over the wagon. It just didn't feel as old as what it was attached to. 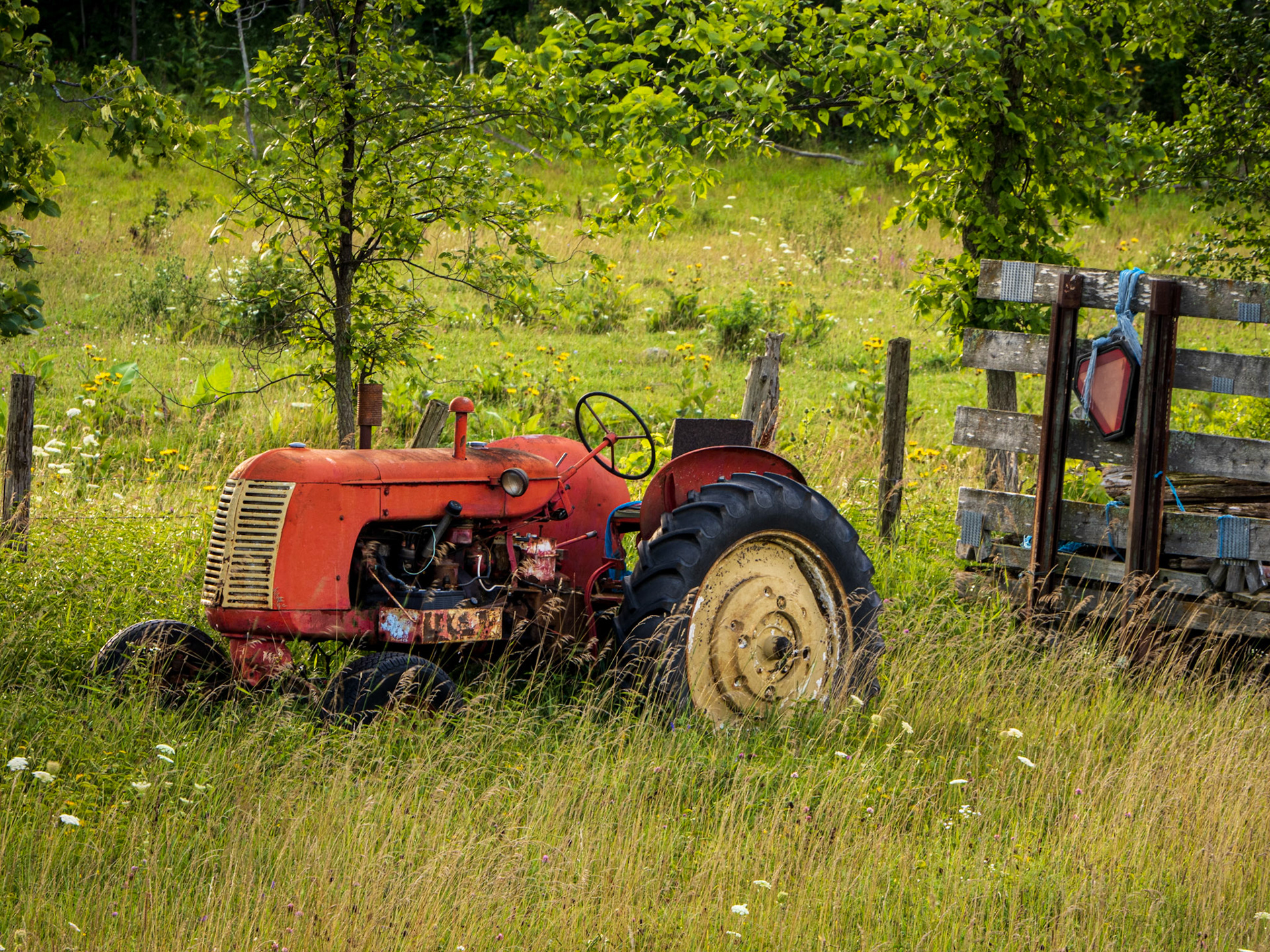 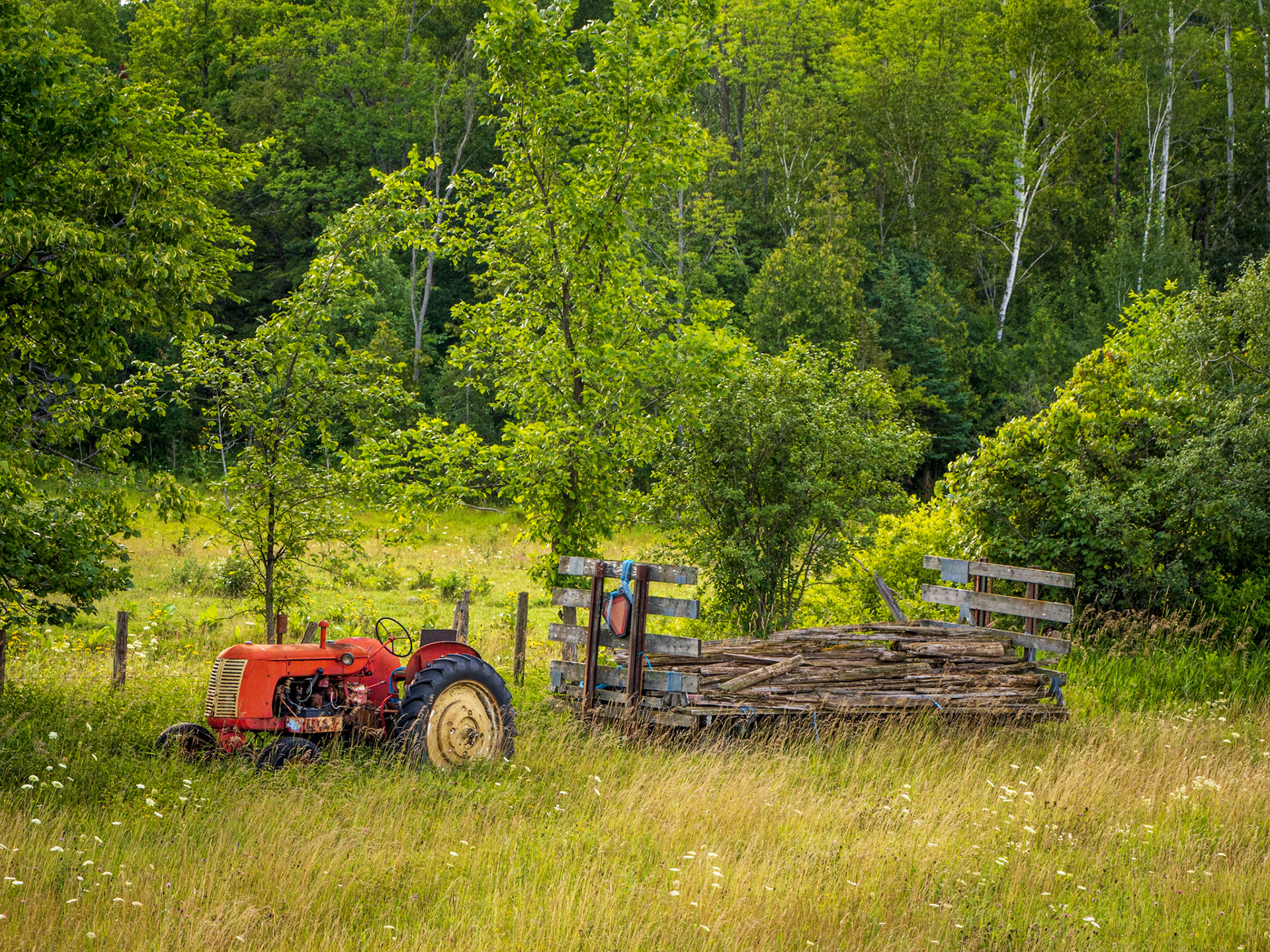 Shooting High Resolution
I have recently entered into an agreement with a Canadian jigsaw puzzle company, PuzzQuest, and while we are starting off small (one image from each of several artists) it's my hope to build the collection. Their technical requirements are quite high. One of those details is the image resolution. The company wants the largest file possible so they have options in terms of cropping and aspect ratio. While I was able to meet that need with the image they selected - thanks in large part to the new Super Resolution functionality in Lightroom Classic (and Adobe Camera Raw), going forward I'd like to meet the requirement more - natively - if you will.
My Olympus EM5 Mark III has a built in functionality called High Resolution Mode. When enabled, this allows the camera to capture up to an 80mb+ raw file - using a 20 megapixel sensor! It does so by slightly shifting the the position of the sensor over a series of frames and then blends/combines them into a single raw file.

If you look at the grasses in the foreground, you will see what appears to be motion blur, but at 1/125sec, blur is not likely. The movement you see here is the blending of 8 separate frames to create a 67MB raw file.
It's a pretty cool bit of computational photography, but there are some caveats with my camera model:
- The camera must be braced, ideally on a tripod. Handheld is not an option.*
- Subject matter should not be moving. So, avoid portraits or scenes where there is a lot of action.
I've used the feature a couple times in shooting still life compositions, but I wanted to try it on a landscape. I've included a couple examples here. If nothing is moving, you likely won't see anything noticeably different. But as luck would have it, there was a breeze during some of my exposures - and even one where a bird flew through the scene.

Look to the trees near the right and you will see a smear of white. That is a bird flying through the multiple exposures needed to create this 65MB image

Motion in the foreground grasses and mid and background trees is evident but not overly distracting. Could this be a candidate for a new puzzle? Maybe, once I tone down that hazard sign.
*Other higher-end Olympus models such as the Olympus OM-D E-M1 Mark III and E-M1X offer both tripod and handheld high resolution modes.
Wrap Up
Oddly enough, I started this project with the plan of mostly just showing photographs. But then the words started flowing...
I hope you've enjoyed this little journey and that you keep coming back for more. As always please leave a comment and a "like" if you are so inclined. I always welcome your thoughts and appreciation.

Home on the Range

Views from the Fortress of Moderate Solitude

Springtime in the Backyard

A Roadside Attraction
↑Back to Top