ISO 400, 8 seconds at f/9.5, standard resolution capture.
Early (ish) on a muggy, heavily overcast Friday morning, I woke up to catch the sunrise. While I was a little too late to catch the pre-dawn color (assuming there was any), I was awake, so I decided I would make the drive to Cordova Falls, near Havelock. My wife and I had made the trip once in late June, on a weekend and it was very busy with nowhere to legally park. We only stayed a little while so I could get some photos.
Even though the weather was not the greatest, I thought I would make the trip again, earlier and on a weekday. Overcast weather meant that I would have more flexibility creating longer exposures and also contrast on the water would be reduced, making it easier to retain highlight detail.
As luck would have it, I was only one of two people at the falls this time. The other person was a fellow photographer. I assumed he was fairly local, as he mentioned he visited the falls two or three times a week. I was envious of that flexibility!

He mentioned his disappointment that the crowds of people coming to the falls were leaving behind their garbage. Although enforcement had increased (not sure if this was local police, bylaw officers or ministry of the environment officers), there was still evidence of inconsiderate people if you looked around.
I spent a peaceful 90 minutes there this time, primarily experimenting with long exposures (6-15 seconds) and also testing out how my Olympus' "high res mode" would handle something like moving water. Overall, I was quite pleased with the results!
The water was noticeably deeper and faster moving this time around. The rocks you see in the left photo below are from about 6 weeks ago (late June), compared to the image on the right (mid August). Same ISO (400) and exposure for both (6 seconds at f/9.5). Notice the rocks in the background are also less visible in the right image.
It's likely the dam at Cordova Lake (top of the falls) as letting more water down the river. 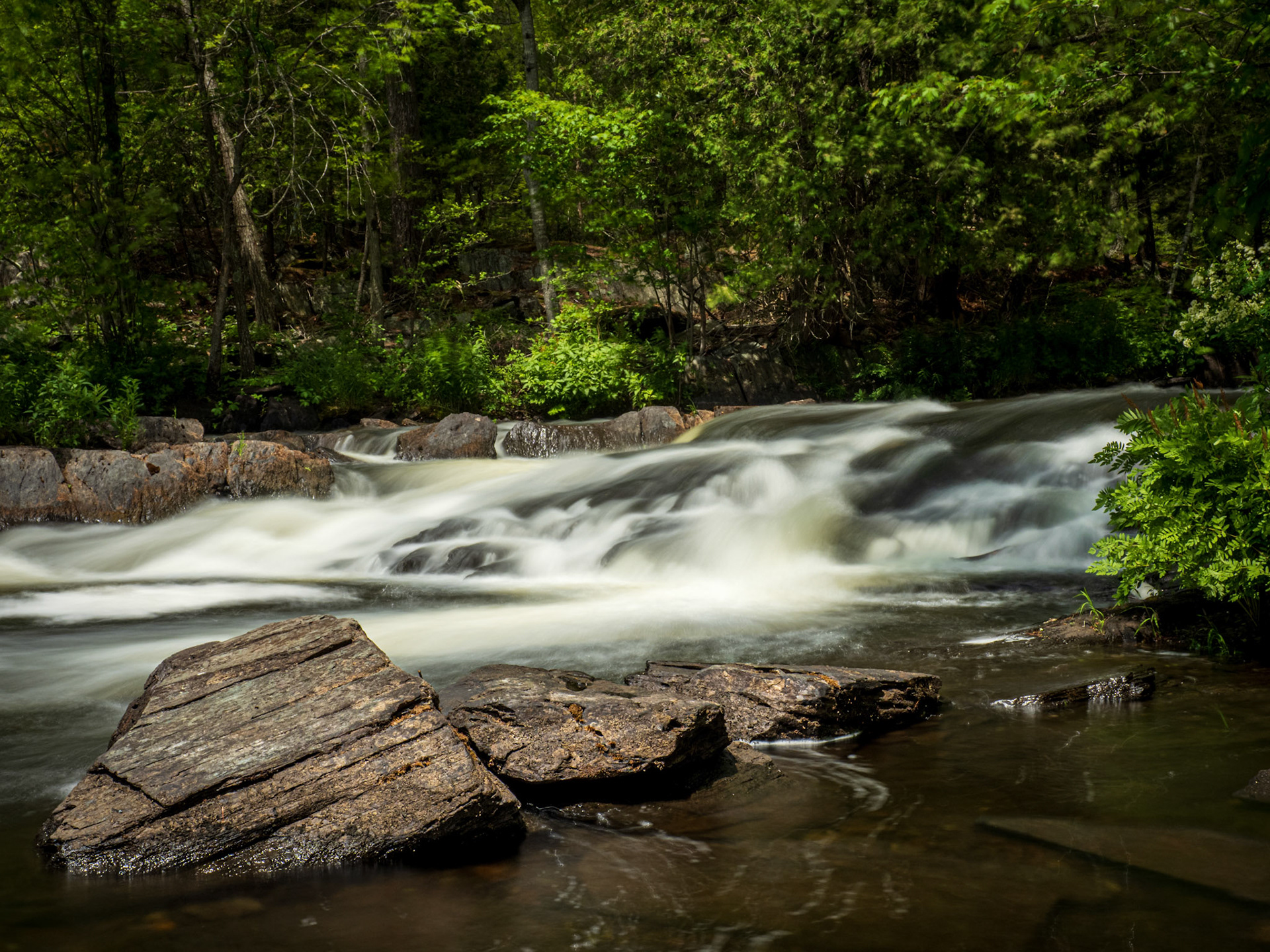 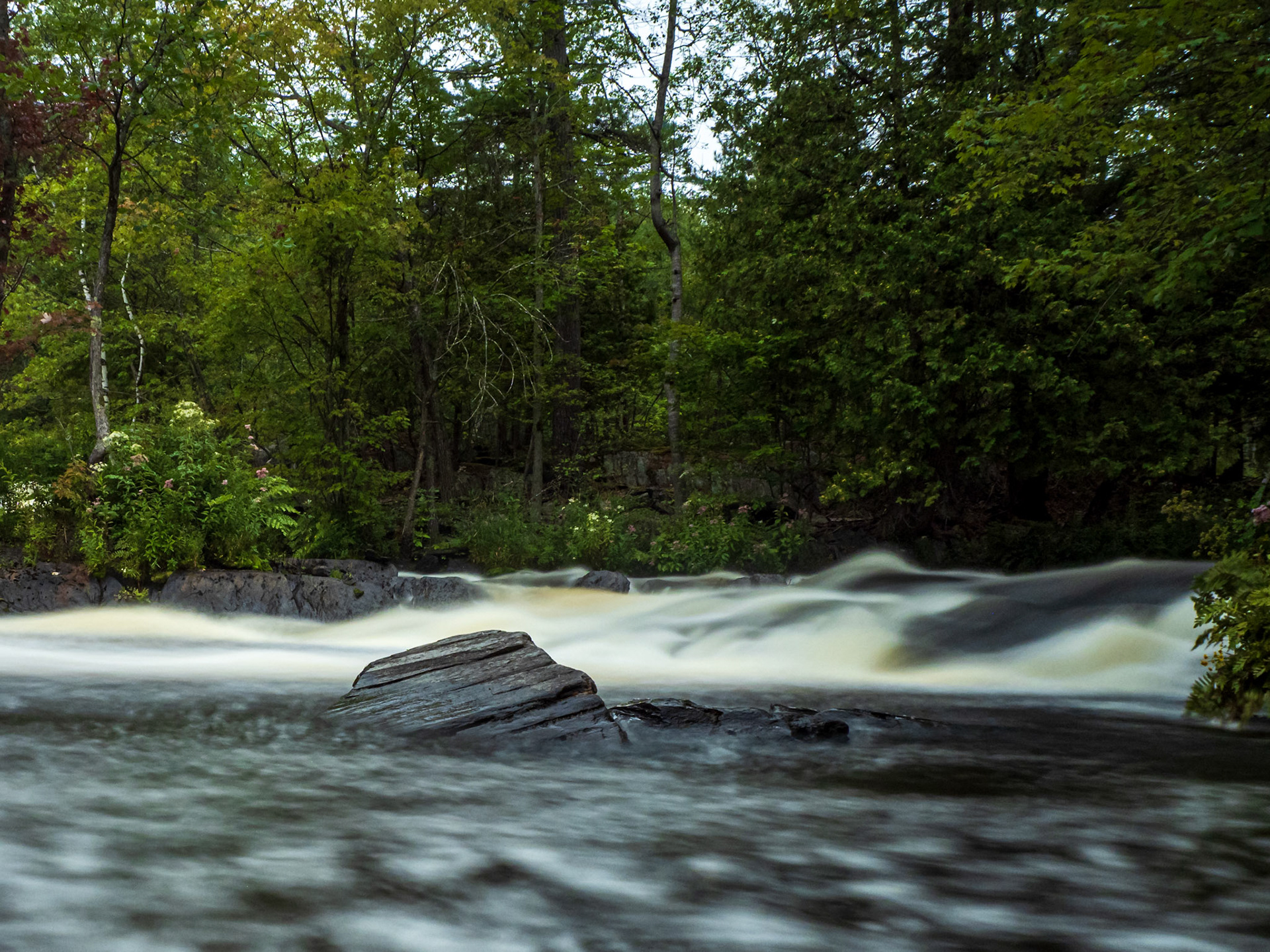 I find the shot on the left of great interest. Not only is it an indication that autumn is on its way, but the long exposure (15 seconds) and close focussing on the maple leaves give a stark delineation between the foreground and background. Note how tack sharp the edge of the rocks is in the foreground. 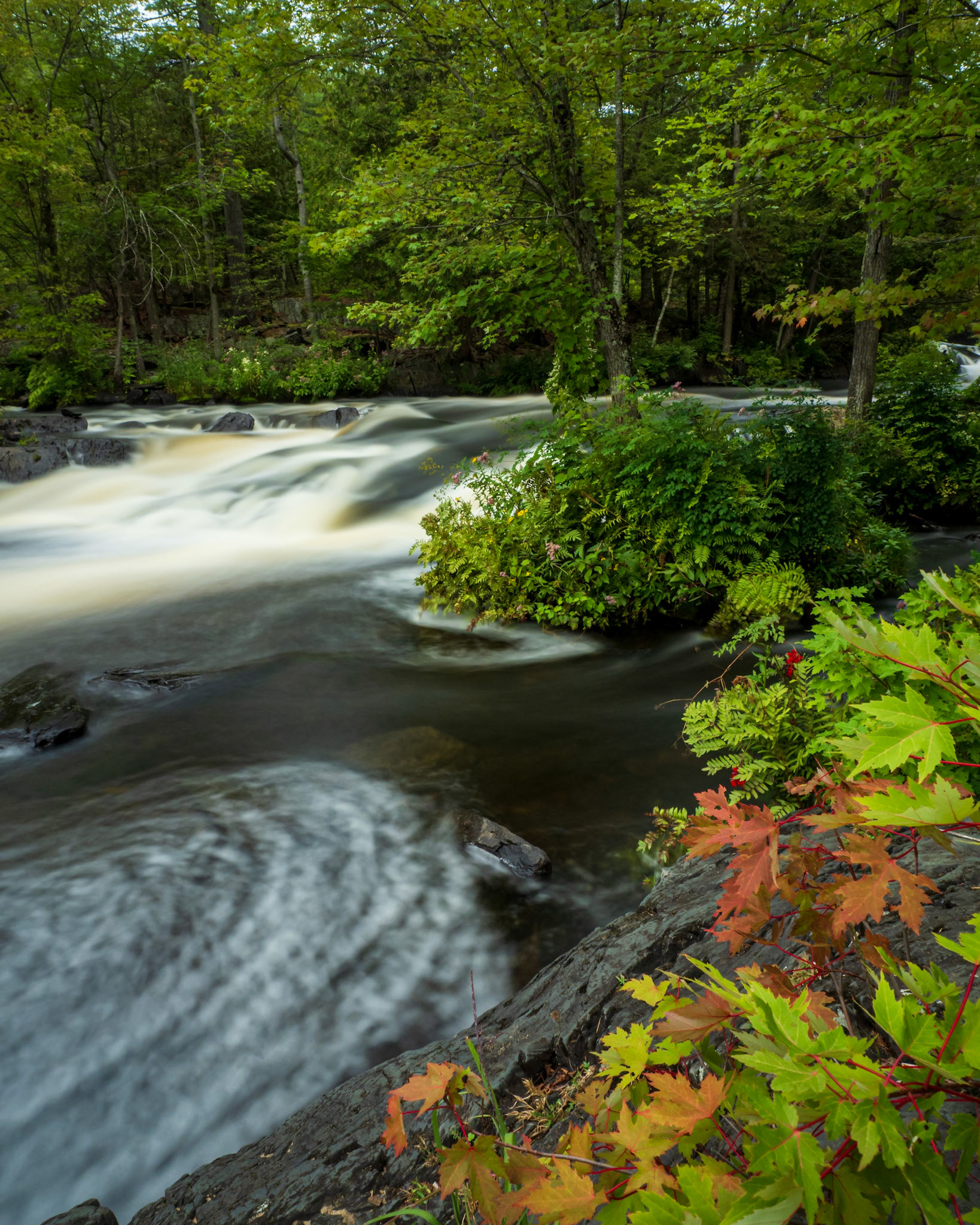 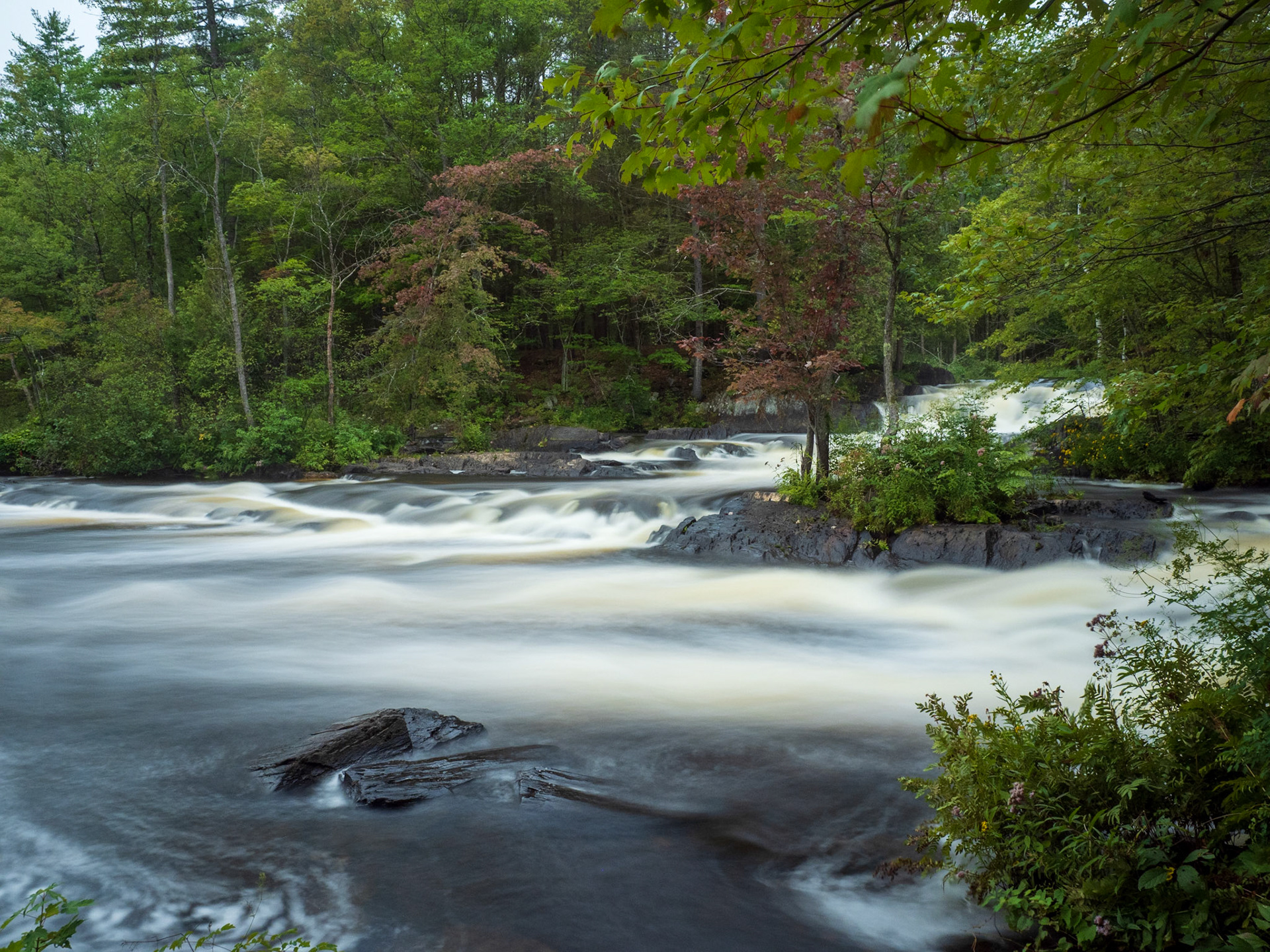 More hints of fall color in the trees and the forest floor. I was later informed that the small plant was likely poison ivy, so I'm glad I was wearing jeans and did not touch the plant! I will never understand why we call it Poison Ivy, when it looks NOTHING like ivy at all... 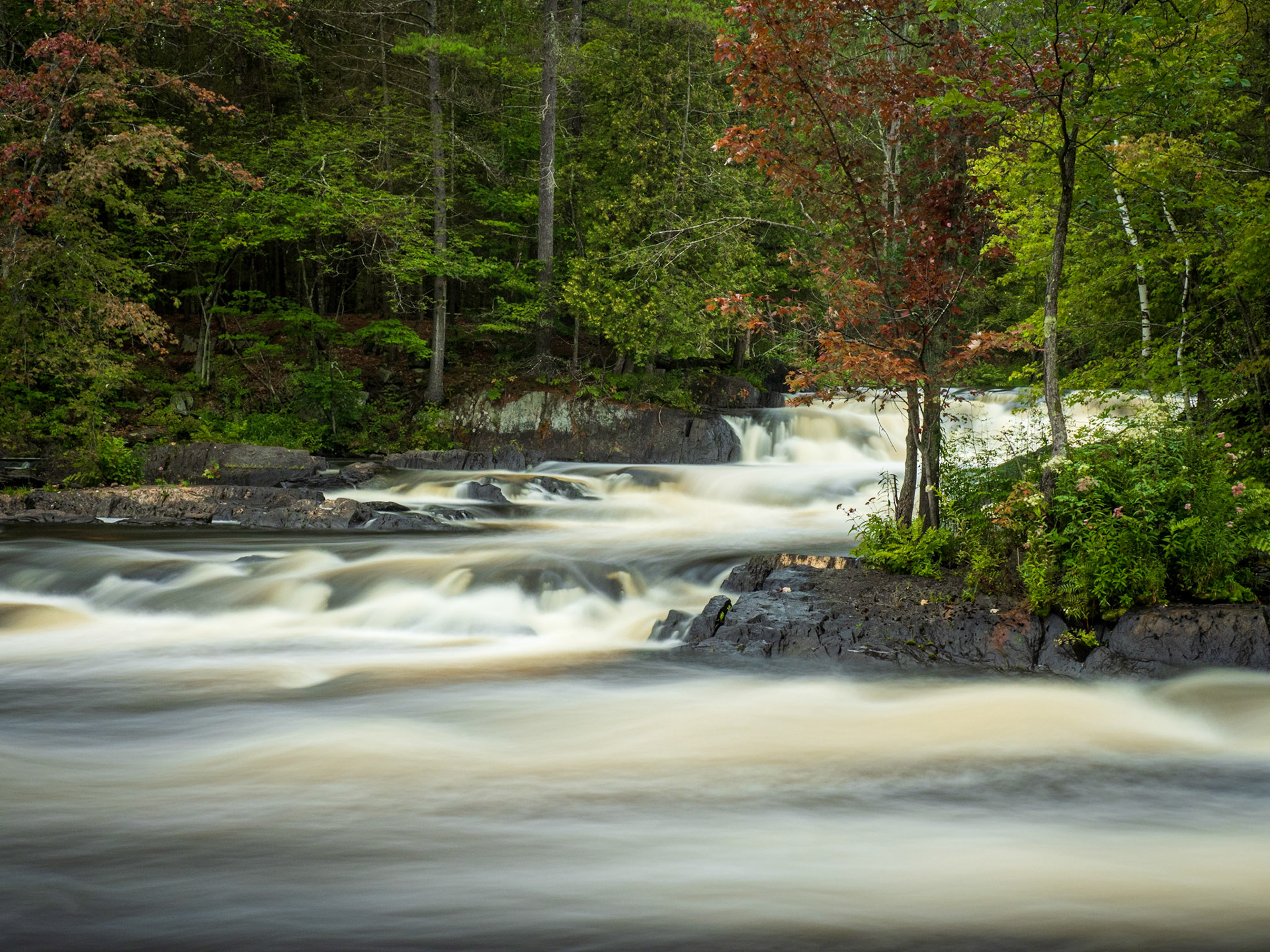 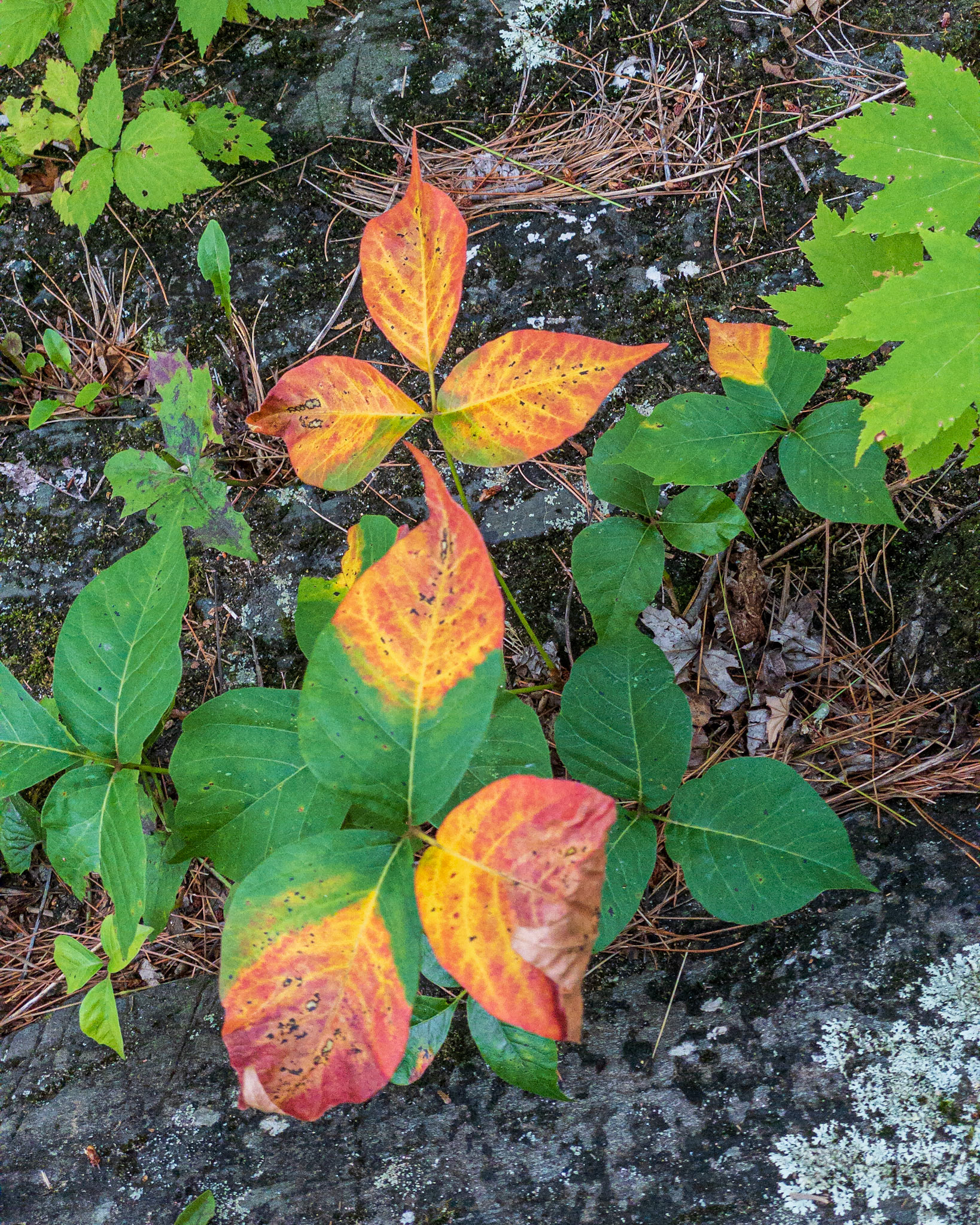 Another 6-week comparison is below. Not quite the same angles or focal length, but close enough. The image on the right is an 8 second exposure, but more importantly, this one was captured using the High Res Mode on my Olympus camera, which captures 8 frames while slightly shifting the sensor in the camera, generating  - in this case - a 62MB file.
From a 20 Megapixel sensor.
A normal resolution capture from this camera is 18.5MB.
There is some very interesting blending going on here; not just the blend/blur of the moving water over 8 seconds, but also the blend of multiple frames being composited together into this much large file. 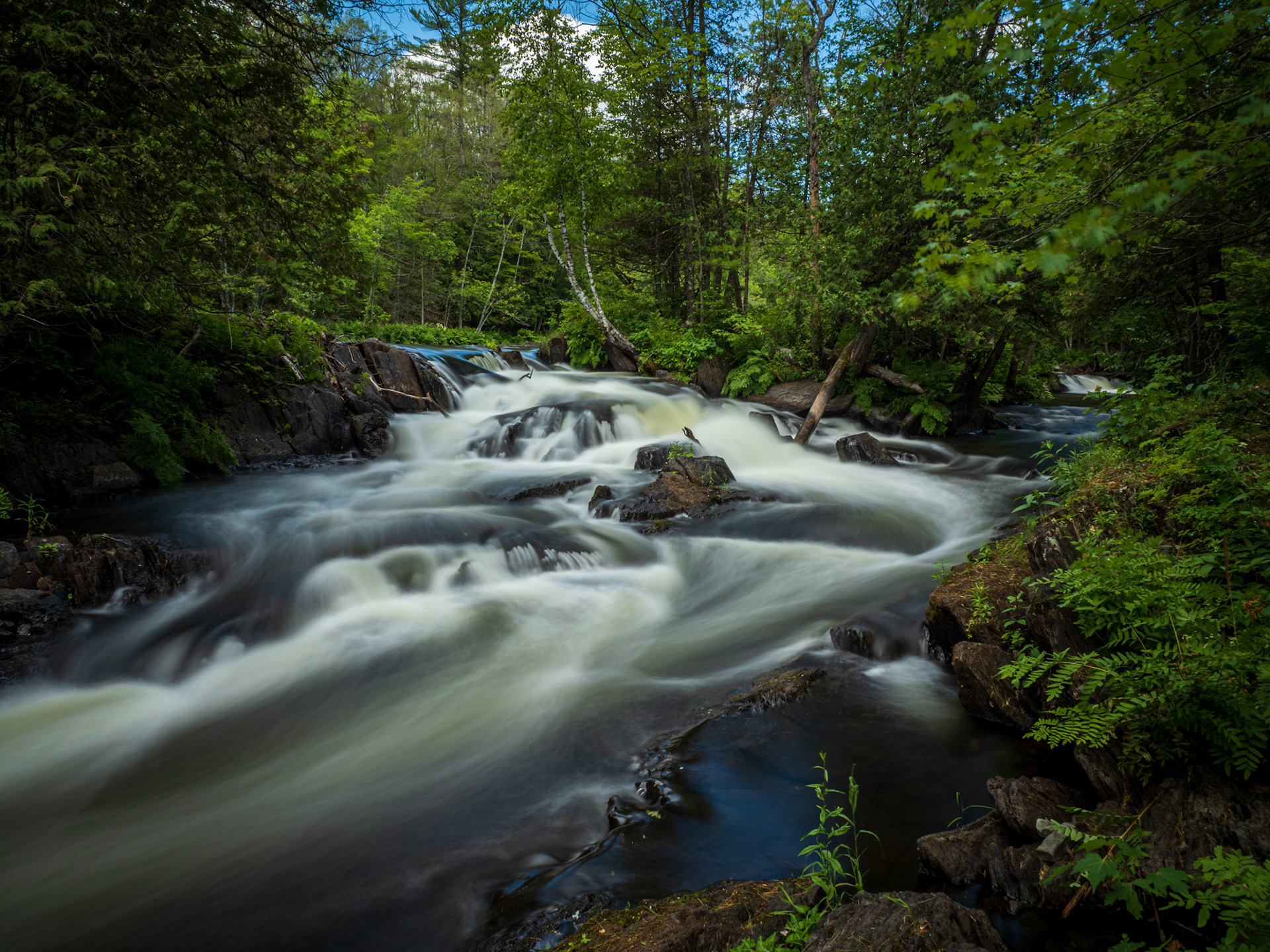 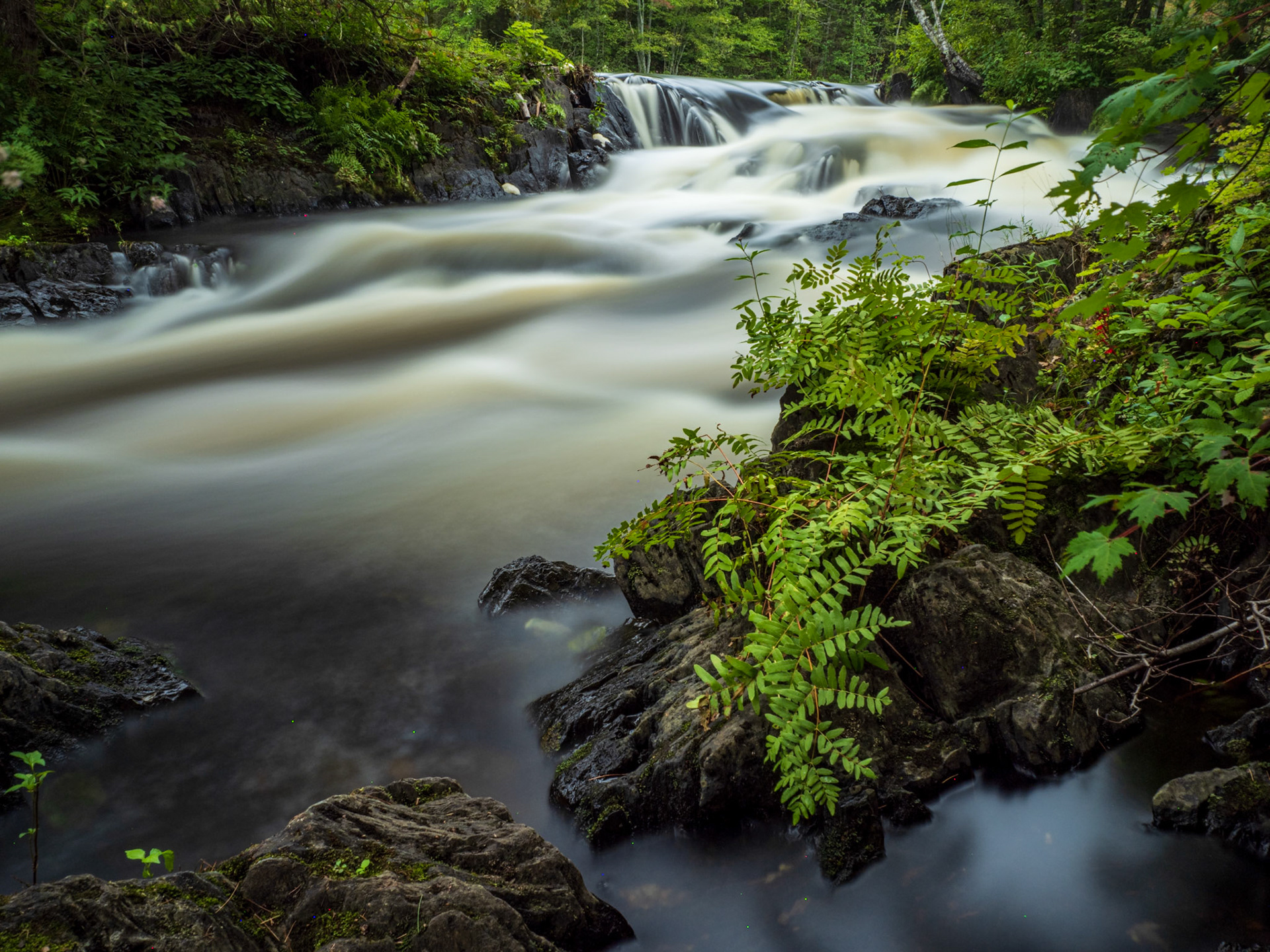 Second Cascade
I could easily have spent the better part of the morning at Cordova Falls, but I still had a 45 minute drive back to the cottage. Before leaving, I made my way to a smaller, higher elevation cascade and am quite pleased with the resulting capture, another example of combining long exposure (8 seconds) with High Res Mode.
In hindsight, I wish the thin, scraggly cedar on the left was not in frame, but when I was composing, I thought it added something to the shot. I was right; it added a visual distraction. Not exactly what I was going for. lol​​​​​​​

Perhaps removing this little tree will make a good Photoshop project. Time will tell.
Thank you for coming along on this trip to the falls. I hope you've picked up some new information, or new inspiration in the process. Feel free to let me know in the comments.
Until next time...

A Weekend in Ottawa

Patience in the Shadows

The Pond and Beyond

Go Tell it on the Mountain

Legend of the Fall - A Sabbatical Photo Journal
↑Back to Top